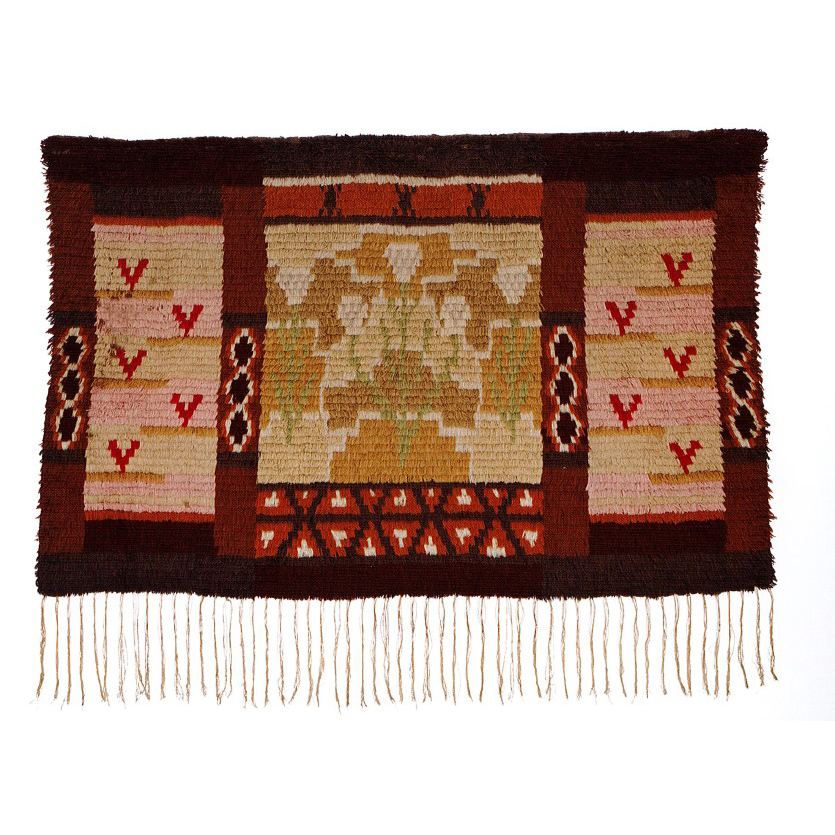 Woven out of wool, a tufted rug type was used in Viking boats for warmth in the first millennium already. In Finland ryijy-rugs have been woven at least since the 1500s, when they were useful in cold interiors. Ryijy became luxury items when they started to feature images of courtly life. The weaving of ryijy-rugs spread to the countryside and at the same time the motifs became more vernacular – trees of life, spur wheels, tulips, hearts. The folk ryijy-rug era begins at the end of the 1700s.

At the end of the 19th century in national romantic spirit, artist became interested in the decorative and colourful ryijy-rugs, and they became collectibles. The ethnologist U. T. Sirelius published a book on ryijy-rugs in 1924, thus fixing their meaning as something peculiarly Finnish and at the same time kickstarting an unprecedented enthusiasm for ryijy-rugs in homes across the country. It became a matter of pride to make a rug for one’s own home. The Neovius company and the Friends of Finnish Handicrafts responded to demand with kits that let the customer purchase the design and yarns and make the rug themselves.

The designs of old ryijy-rugs, as well as modern, artist-designed, versions, spread into homes via postal catalogues. In the 1930s, having a functionalist rug on the living room wall was part of the modern lifestyle. As ryijy-rugs became more popular, interest also grew in more individualized versions. As textile designers renewed the field, rug making became an artistic endeavour of its own. The features of the modern ryijy-rug included long, dense tufts and a vibrant colour palette.