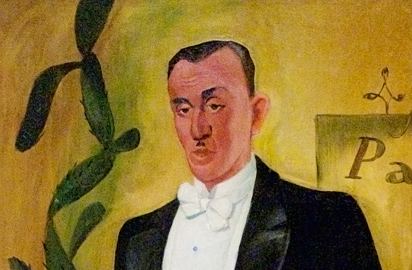 The literary publication, Tulenkantajat (The Flame Bearers), was founded in 1924 by Nuoren Voiman Liitto and also provided the name for a dynamic group of young sophisticates. In addition to writers, the group included visual artists and musicians. The significance of the Tulenkantajat group in the 1920s, as a mediator of the phenomena and stylistic currents of the time, is undisputed in Finland. In the hectic pace of the big city, trains, aeroplanes and neon-lights pointed to the form and momentum of a future reality, which was in conflict with convention and the modest agrarian life. Following international examples, they wanted to place urbanisation and modern art at the centre of cultural life.

Väinö Kunnas was one of the few visual artists in the inner core of the Tulenkantajat. He painted psychologically astute portraits of the group’s members, and did illustrations for the magazine. Perhaps the most famous example of Kunnas’ relatively small artistic output is his portrait of the Tulenkantajat group’s key member, Olavi Paavolainen, from 1928. The illustrated collection of essays by Paavolainen, Nykyaikaa etsimässä (In Search of the Modern), achieved cult status. Drawing on Paavolainen’s personal observations, it deals with the major themes of the period such as modern lifestyles and surroundings and new artistic currents.