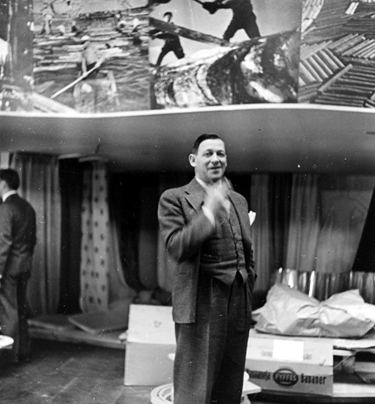 Already in the late 1920s, Alvar Aalto was a cosmopolitan who felt at home in the company of the pioneers of modern art and architecture. Connections he made via Les Congrès Internationaux d’Architecture Modernen (CIAM) led to close friendships with, among others, the architects Walter Gropius and Le Corbusier. On the side of visual artists, Aalto spent time with the sculptor Alexander Calder, for instance.

The reputation of Alvar Aalto, together with his wife the architect Aino Aalto, as forerunner of functionalism spread across the world buoyed by the designs for the Paimio tuberculosis sanatorium (1929–33) and the Vyborg public library (1933–35). Aalto’s furniture, born of “ultramodern” inventions relating to bending wood, spread his reputation as an innovative designer. Through competitions organised by Finnish glass factories, the Aaltos also achieved fame as glassware designers.

When, through the 1930s, Finnish architecture was caught in a debate about the relationship between traditionalism and functionalism, Aalto had already moved beyond the tight rationalism of the international style, and was creating his personal architectural idiom. The luxury villa he drew for Maire and Harry Gullichsen, Villa Mairea (1938), and the Finnish pavilions he designed for the Paris (1937) and New York (1939) World’s Fairs, further strengthened his position among the pioneers of modernism.